The Defence Reserves Support Council has, for another year, recognised Douglas Partners for a Supportive Employer award in recognition of the support and encouragement provided to Jack Snowden, an Environmental Scientist in Douglas Partners’ Sydney office. 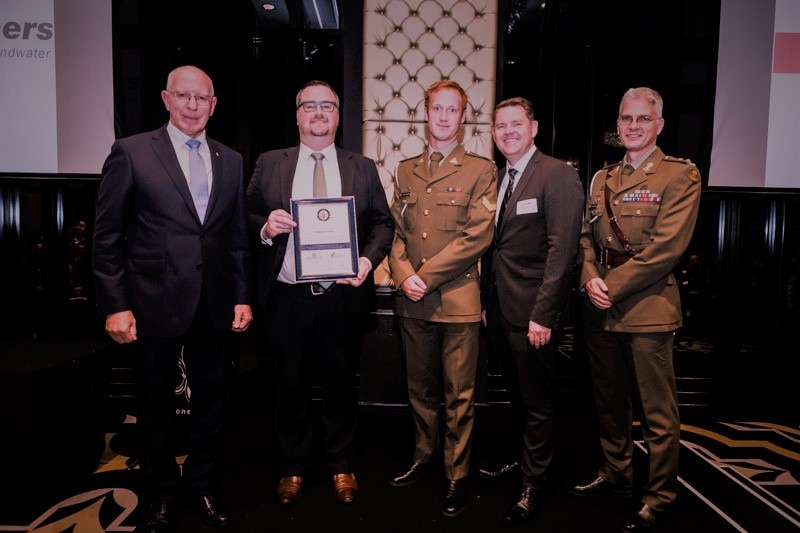 Jack is a section commander with 7 Light Battery, 9 Regiment, Royal Australian Artillery based in Sydney and has been a part of the Defence Reserves for over 8 years. He participates in training exercises and instructs on courses across Australia on a regular basis.

The ceremony, which took place at Dolton House Hyde Park in Sydney and was hosted by the NSW Defence Reserves Support Council (DRSC), was attended by Jack (in full uniform) and David Holden, an Associate in our Sydney office.

The event highlighted the strong support Douglas Partners and many employers across NSW provide to reservists and was also an opportunity for employers to learn more about the programs and initiatives offered by Defence Reserves Support, gain a better understanding of the many roles reservists undertake in the ADF, and how their reservists’ military skills are transferable to their civilian workplaces.

Douglas Partners recognises the core skills that the Defence Force encourages and develops in its members including leadership, initiative, teamwork, problem solving, perseverance, confidence, communication and the ability to work under pressure. A range of practical skills are also encouraged including resourcefulness, precision, perserverance and the ability to improvise in difficult circumstances. These skills are reflected in Douglas Partners own Core Characters of safety, honesty and integrity, dependability, cooperation, positivity, respect and flexibility.

Douglas Partners stood in elite company at the ceremony with other recognised employers including Qantas Airways, St Vincent’s Hospital, Westpac and Sydney Trains to name a few.