The convict heritage of Newcastle was under investigation as part of the development of the Arena Apartments at Newcastle.

The Arena apartment development is situated at the site of the former Royal Newcastle Hospital (RNH) which overlooks the Pacifi c Ocean and the iconic Newcastle Beach. The original hospital was built in 1817 by convicts for convicts. Over time, the hospital grew in size as Newcastle changed from a small penal colony to a vibrant industrial city. After 190 years of operation, however, the hospital closed its doors in 2007 and the land became prime real estate for development.

The Arena apartments are situated on one section of the former hospital site. The development includes two towers; one eight stories, the other 16 stories with a 3 level carpark that required excavation depths of up to about 13 m below existing ground level.

An interesting legacy of the convict era included uncharted shallow mine workings beneath the site. These workings were previously identified during the construction of the former David Maddison Building in the late 1970s where brave geologists had entered the former mine to map a small section of the workings. One of the challenges for the Arena development was to determine the location and layout of these unchartered workings and determine the remedial measures to allow development of the site.

Douglas Partners was engaged by KRED Pty Ltd to undertake a combined geotechnical, contamination, groundwater and mine subsidence investigation. The work included a review of available background information and drilling boreholes to the base of the Dudley Seam.

The results of the drilling and previous mapping of the workings in the 1970’s had indicated that the workings were irregular in size and layout. It was assessed that a major normal fault that bisected the site had truncated the workings thereby confirming the workings to the southern part of the site at a depth of about 10 m below the basement floor level.

Development of a grout bore layout. This included the drilling of 108 bores across the site;

Provide recommendations on the grout mix design based on laboratory testing on several grout mixes; and

Inspections during drilling and grouting which included downhole camera inspections, measurement of grout takes and sampling of the grout for verification testing. 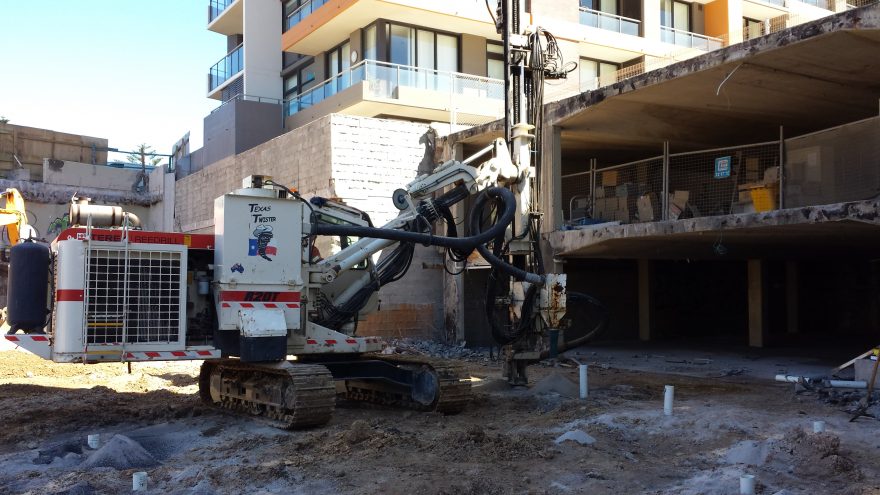