After several unsuccessful attempts by developers to redevelop the derilict Sydney site in Gloucester Street, The Rocks, Stamford Property Services engaged Douglas Partners as part of their dedicated design team and were able to take the project beyond the concept design stage for the first time.

Redevelopment of the derelict Sydney site at 171-193 Gloucester Street, The Rocks, has been attempted by several previous developers, with little success. Redevelopment only became viable when Stamford Property Services, together with their dedicated design team, including Douglas Partners, became involved, enabling for the first time the project to go beyond the concept design stage.

The project initially comprised the demolition of the existing multi-storey buildings; retaining and possibly extending 6 m beneath the heritage listed Reynell Building; construction of a nine-level basement; and the construction of a new 33-storey building. The main physical constraint was the proximity of the proposed basement excavation to the double-track City Circle Tunnel (CCT) and related easement, located some 12 m below the Cumberland Street level.

The main geotechnical concern was the potential for rock movement from potential stress relief with subsequent deformation of the tunnels during excavation of the Hawkesbury Sandstone. The solution found by the Douglas Partners team was to reduce the depth of excavation under the 33-storey tower, to underpin the retaining wall adjacent to the Harbour Bridge (where required) and excavate a two-level basement beneath the Cumberland Street footprint, sections of which were directly over and only 6 m above the crown of the CCT. Commenting on the project, Douglas Partners’ Rock Mechanics Manager, Charles Marais observed that “As geotechnical engineers we were confronted with the same challenges that previous design teams had faced, but until now no suitable solution had been devised.” Based on extensive design and modelling, rock support systems have been designed to protect the tunnels and Harbour Bridge approach.

The excavation was completed mid 2010 without any time delays, or budget overruns.

““As geotechnical engineers we were confronted with the same challenges that previous design teams had faced, but until now no suitable solution had been devised.”” 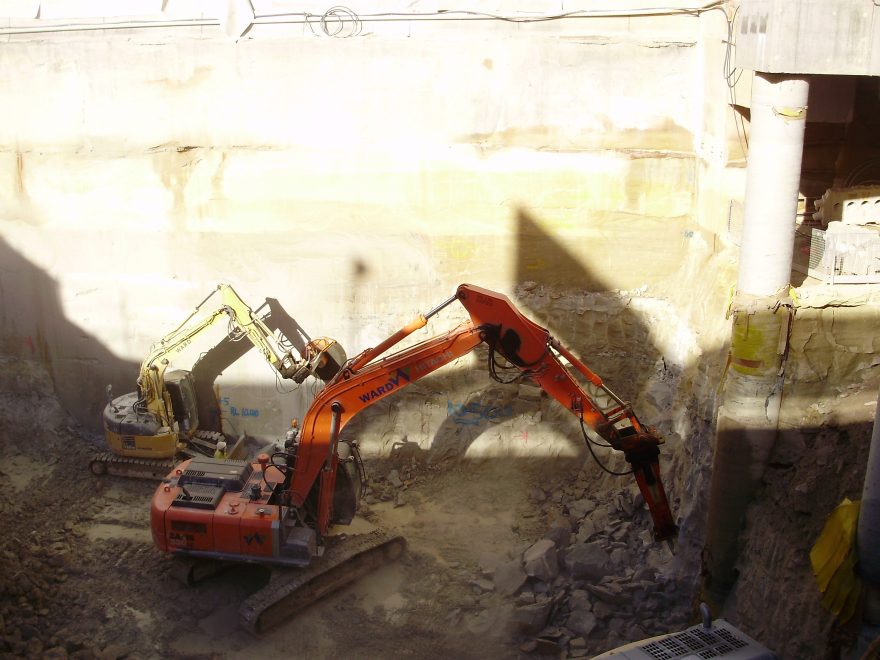 Redevelopment underway at the derelict Sydney site in Gloucester Street, The Rocks.