The Level Crossing Removal Project – Package 1 is part of the Victorian Governments commitment to remove 50 of the most dangerous and congested level crossings across Melbourne. Package 1 involved removing three crossings on the Frankston Line where it crosses North Road in Ormond, McKinnon Road in McKinnon and Centre Road in Bentleigh, together with a fourth crossing located elsewhere.

The North-McKinnon-Centre (NMC) package involved replacing approximately 2.5 km of at grade track with three rail cuttings up to 8 m deep at each of the bridges which replaced the level crossings.  The cuttings are retained by piled retaining walls and during the main construction occupation approximately 250,000 cubic metres of soil was removed.

Douglas Partners were the geotechnical consultant to the project alliance through a subcontract with KBR.  The alliance included representatives of the State Government together with John Holland and KBR.

Design and construction of the NMC package presented significant challenges due to its location in residential suburbs within a tight rail corridor and a short rail occupation timeframe.  As a result, careful design and innovative construction techniques were necessary to limit impacts on the community.  Douglas Partners addressed a range of geotechnical challenges which generally fell into one of three areas, earthworks, structures and groundwater.

The structures comprised three bridges, stations, base slabs and around 4 km of piled retaining wall.  The piles included driven steel sheet piles and Continuous Flight Auger (CFA) piles.  Geotechnical challenges that Douglas Partners addressed included assessing the temporary and permanent stability of the walls, particularly as the lead time for the sheet-piles required locking in the design at a very early stage.  Pile driving involved the use of some innovative techniques to minimize vibrations.

Douglas Partners were also deeply involved with assessing the structural base slab with a screw pile system being adopted for two of the three cuttings that extend below the groundwater table, to resist the long term hydrostatic uplift pressure and cyclic loading from trains.  Construction dewatering was also a major issue with two of the three cuttings extending below the water in a silty sand aquifer with the possibility of significantly affecting the wall stability and 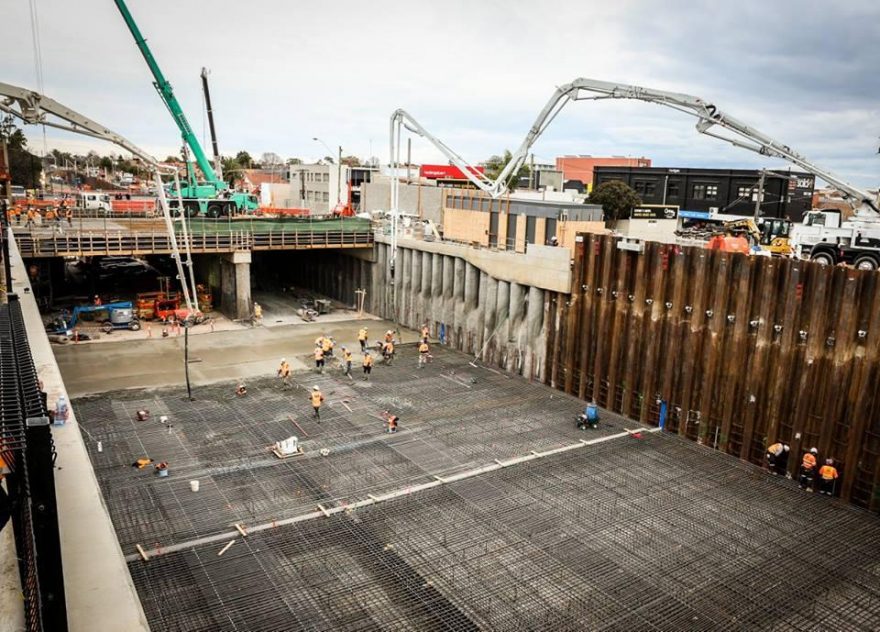 Douglas Partners and John Holland had previously worked together on a directionally drilled drainage system, which was used for landslip stabilization on the World Bank funded project at Watawala in Sri Lanka in 1995.