​Innovative investigation techniques and numerical modelling methods allowed a refined and cost effective mine remediation strategy to be adopted for this ground-breaking project.

Marketown East was a groundbreaking project for the Newcastle CBD. Although the shopping centre was a modest four storeys it was over an extensive footprint, much large than any other structure built in the CBD. Further there are several 12 storey residential towers proposed to be constructed above the podium level.

Douglas Partners’ undertook Investigation of mine working including CCTV inspection and Sonar mapping of the layout. Computer modelling of predicted subsidence using LAMODEL indicated potential subsidence greater than could be accommodated by the structure and therefore the model was then used for assessment of various grouting options. Consultation with the client, the MSB and structural engineers (TTW) was undertaken to select a preferred grouting scheme which involved targeted grouting on the sides of key pillars below the site to limit subsidence to that which could be tolerated by structural design and presented a ‘low volume / low cost’ solution. Third party peer review of Douglas Partners’ modelling confirmed the suitability of the design options.

A risk workshop was undertaken involving the client, Douglas Partners and structural consultant to identify key risks to the project, required risk controls and to confirm that the selected grouting plan would acceptably limit risk to client and the MSB. The risk assessment was presented to the MSB to support the proposed grouting plan and subsequently resulted in consent from the MSB.

Verification of the grouting works was undertaken by Douglas Partners. One of the challenges during grouting works was that the layout of the workings did not match the mine record traces.Douglas Partners’ sonar was used within the grout bores to quickly map the workings and allow adjustment of the grouting model to suit the actual conditions. Careful verification works including coring of the grouted void and rubble provided important information regarding the permeation of grout. 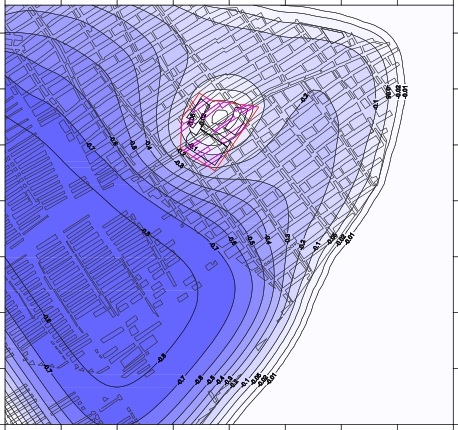