The box cut was excavated to a depth of 34.5m through extremely low strength, extremely weathered muscovite schist and granite dykes with a groundwater table at a depth of 6m. This required dewatering during excavation and the installation of horizontal drain holes and a series of multi-strand anchors within the shotcreted face above the tunnel portal.

The portal face comprised medium to high strength schist with low strength schist extending to 5m above the crown. Spiling bars, 24mm diameter were installed from springline to springline 200mm outside the excavated profile with 6, 4-bar Pantex lattice girders encased in fibrecrete (using hard plastic fibres), supporting the brow and first 5m of the decline.

Once inside the portal the ground was excavated by drill and blast techniques and supported with fibrecrete and pattern bolting with the bolts centrally encased within the fibrecrete. In places the fibrecrete and bolts were brought down the side walls to cater for adversely oriented joints and/or bedding.

The only exception was near the portal where a granite dyke, weathered to clay, was encountered. This area required spiling, split-set bolts, lattice girders and fibrecrete.

Where truck passing bays and refuge chambers were required additional support comprising 6m long strand cable bolts were installed in the roof and brow of the over-excavation prior to opening up the cross section. As the decline became deeper the fibrecrete was replaced with mesh reinforced shotcrete. 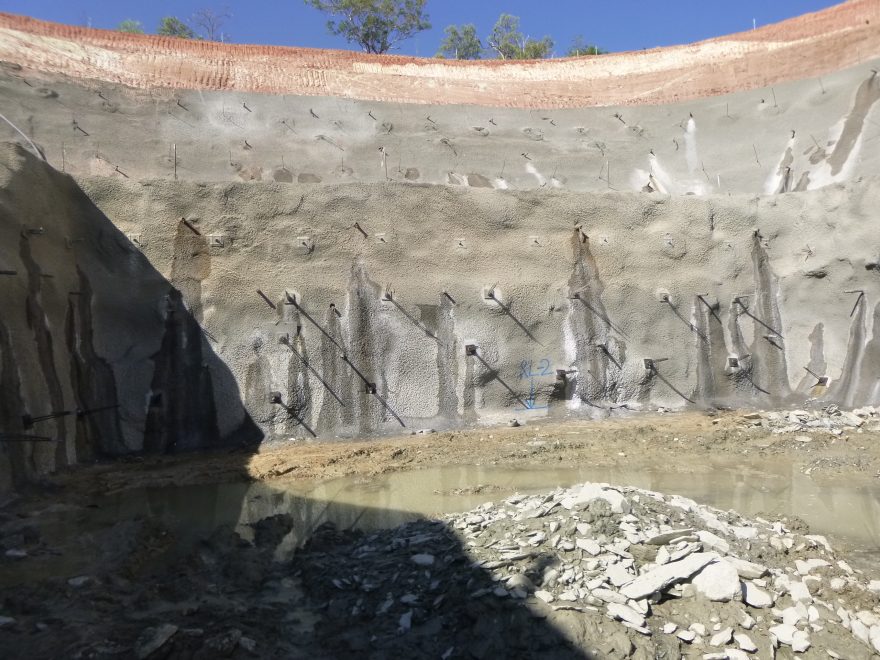 Douglas Partners was asked to re-design the tunnel portal, previously designed by others.