This paper presents geotechnical and geo-environmental aspects of the design and construction of one of the world’s deepest soil bentonite (SB) groundwater barrier wall at the former Steelworks site at Newcastle, Australia. The site is undergoing a $110 million remediation programme, and a critical part of the remediation strategy is the construction of a soil-bentonite wall, nearly 50 m deep and 1.5 km in length. This “up-gradient” cut-off wall was designed to divert groundwater around the most heavily contaminated part of the former steelworks site, known as ‘Area 1’.

The Mayfield Site is approximately 155 ha within the former Newcastle steel works site on the south bank of the Hunter River. Over a period of 130 years this site has housed copper smelters, steelworks and ancillary operations. Steelworks wastes (slag) have been used to fill much of the site. The most polluted part of the site is an area known as Area 1, and was previously occupied by coke ovens, gas holders, and other processes associated with steelmaking.

On 14 June 2001, under Section 21 of the Contaminated Land Management Act 1997 (CLM Act), the Environment Protection Authority (formerly EPA, now Department of Environment & Conservation - DEC) declared the former Steelworks site to be a remediation site. Under the Declaration, remedial works were required because the DEC considered the site to present a significant risk of harm to human health and the environment. In March 2003, RLMC was created by the NSW Government to manage the former Steelworks site and other crown land in the Lower Hunter Region, including remedial and redevelopment works for the site. RLMC has entered into a Voluntary Remediation Agreement with the DEC, where remediation activities are regulated under Section 26 of the CLM Act, as well as the planning approval under the Environmental Planning and Assessment Act (1979).

A total of 32 options and alternatives were reviewed for this project. Generally, the three main site remediation options are the following: 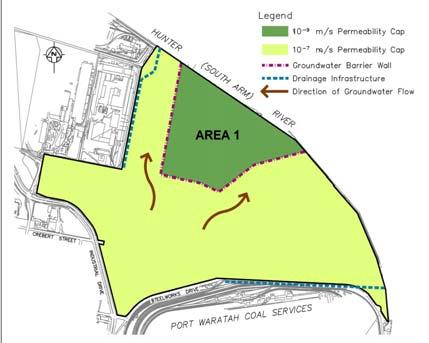 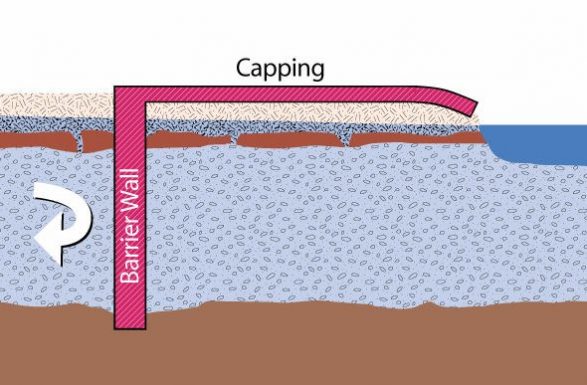 The strategy finally adopted for the steelworks site is containment and comprises the following key elements as shown on Fig. 1:

The barrier wall is 1,510m long, 0.8m wide and has depths ranging from 25m to 49m, keyed into the basal confining layer of clay or weathered rock. The maximum required permeability is 10-8m/s.

The geotechnical investigation comprised 16 test bores, 27 cone penetration tests (CPT) and 20 test pits. The bores and CPTs provided deep stratigraphic information, at an average spacing of 35 m along the wall alignment, allowing the appropriate key-in layer to be determined. The test pits provided information on the fill layer, including depth, composition, excavatability, the nature of obstructions, and the presence of contaminants in the soil or water. The typical subsurface conditions are illustrated in Figure 2, showing a section along part of the wall alignment. 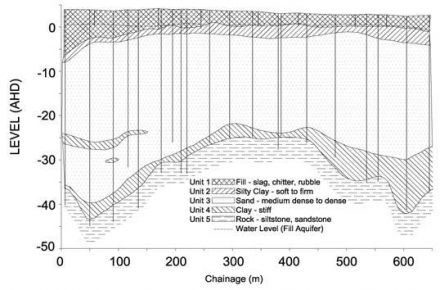 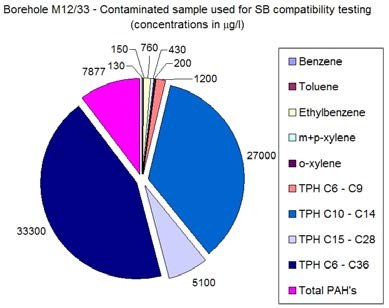 A detailed Environmental Management Plan was prepared to set out suitable procedures for the management of these materials during the pre-trench operations. The pre-trench involved excavation through the fill layer for two main purposes:

Figure 3 above shows the main contaminants in groundwater sampled from well M12/33 at 12 m depth. This water was used during the mix design and for long term permeability testing.

4. Technical Options for Construction of The Groundwater Barrier

The main construction methods considered for the project are summarised hereafter:

The soil-bentonite technology was selected on the following basis:

Soil bentonite walls are low permeability groundwater barriers constructed by excavating a trench under bentonite slurry. The slurry stabilizes the excavation and prevents it from collapsing, even below the water table, as described in Ryan (2007). The range of permeabilities achievable with this technology is given in Fig. 5 and are a function of the nature of the blended soils and of the percentage of dry bentonite added.

Given the range of depths of excavation, two pieces of equipment working in sequence were used: a backhoe modified to dig to 25 metres to complete the first phase of the trench, and a mechanical clamshell to excavate the deeper material down to the final depths as shown schematically on Fig.4. As the excavation proceeded, the trench was backfilled with a low permeability mixture, consisting of a blend of excavated soil, imported Virgin Excavated Natural Material (VENM) clay and bentonite slurry. Mixing of the constituents generally proceeded along the trench in a linear fashion. 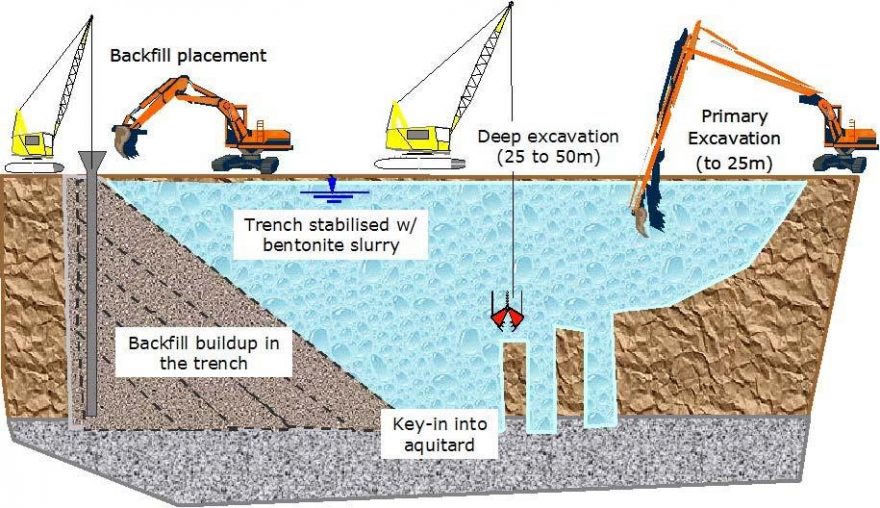 The main objectives of the mix design were: 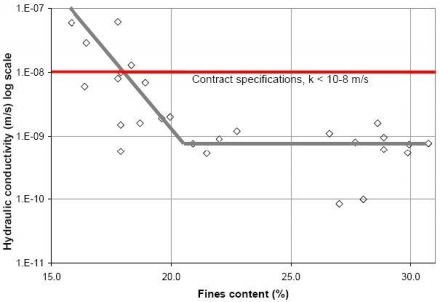 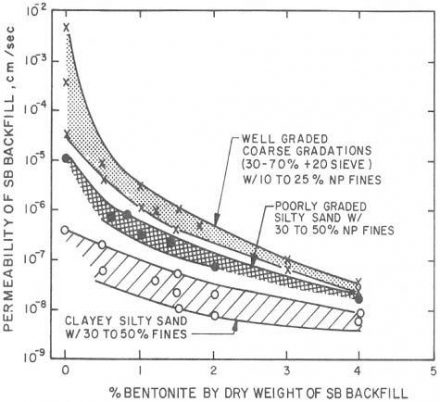 The conclusion of the mix design was that the minimum fines content necessary to consistently achieve a permeability of less than 10-8 m/s was close to 20%, taking into account the materials available for the project, compared to a 30% lower limit indicated by D’Appolonia (1974) in Fig. 6.

The trench stability during excavation was assessed using the CPT data which allowed the balance between slurry pressure and lateral earth pressure to be plotted virtually continuously with depth. Global wedge failure was also considered.

The specification also required that the completed wall withstand a differential head of 5 m across the wall. Hydraulic fracture can occur due to settlement and arching of the backfill, which causes a reduction in vertical effective stresses; when these are less than the horizontal effective stresses, and hydraulic pressures are high enough to induce fracturing, the fractures will propagate horizontally and could significantly impair the effectiveness of the wall as a barrier to groundwater flow. The risk of hydraulic fracture was analysed using FLAC (Itasca 2005) and found that this condition was very unlikely for a wall thickness exceeding 0.5m (actual wall thickness was 0.8m).

The surface completion needed to be trafficable to industrial type vehicles, with deflection criteria of 50 mm vertical settlement and 1:50 differential distortion. This comprised compacted granular material (re-used from site), and the expected performance was checked by finite element analysis.

Environmental management was achieved through the preparation and implementation of a detailed Contractor Environmental Management Plan (CEMP). The CEMP was reviewed and approved by DEC prior to construction commencing.

Pre-trenching works through the fill horizon were subject to full-time monitoring by an environmental engineer. The excavated fill was categorised into Level 1, 2 and 3 soils based on field sensory screening (visual and olfactory), soil vapour screening using a PID, and reference to previous chemical test results, the level 3 category corresponding to Separate Phase Hydrocarbons with no re-use on site and DEC notification. In addition, a material tracking system was used, linking the material source (chainage and depth) with its destination stockpile (GPS coordinates). Other routine environmental management procedures included screening and treating natural sediments for acid sulphate soil conditions; surface water monitoring; management of noise, dust and asbestos- impacted soil.

Quality control of bentonite slurry properties is important to identify any anomaly immediately to ensure trench stability, but is not specific to soil-bentonite walls and includes tests such as viscosity and filter press. 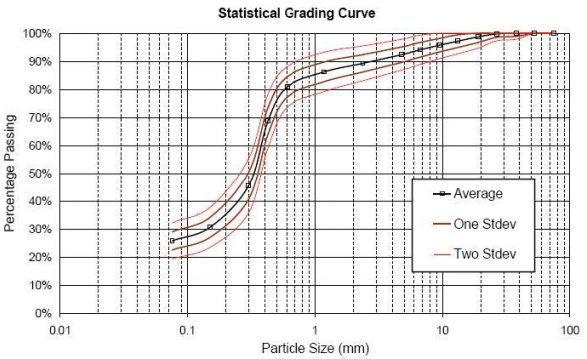 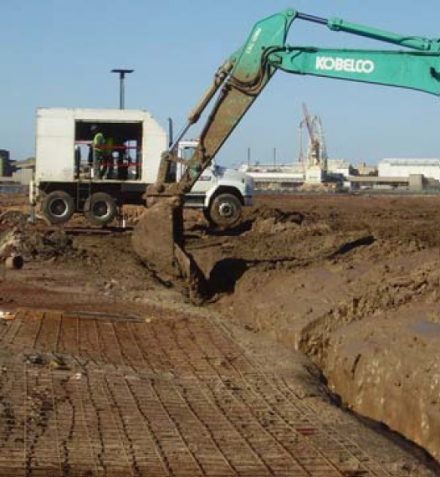 Specific on-site testing on blended backfill material was performed daily before incorporation in the trench. It included daily fines content to verify that the minimum 20% fines (75µm sieve) criteria was respected, as shown on Fig. 7 which is a statistical analysis based on 220 gradations tests), slumps to check consistence and densities. In addition, mud-balance densities of in-trench backfill was monitored from samples taken at different depths (including 2m from the bottom) to check that backfill remained heavier than in-trench slurry by at least 0.25g/cm3.

Twice daily monitoring of the backfill slope indicated a gradient of between 1:5 and 1:11 (V:H) over the course of the works.

A total of 108 permeability tests, including 37 at the design stage, were carried out, with hydraulic conductivities of between 9x10-11m/s and 3x10–9m/s during production. A summary graph of production tests values can be found in Ryan (2007).

As a further check of backfill uniformity and base key, 20 piezocone (CPTu) tests were carried out through the narrow width of the SB wall to the base (about 40 m), as shown in Fig 8, requiring great care to maintain verticality of the cone. This was successful and only a few tests struck the side wall of the trench. It is noted that care is required interpreting such tests because if the cone hits lumps of clay or other inclusions, it can falsely give a signature similar to a sand layer.

The design & construction of a deep SB groundwater barrier wall was completed at Mayfield, NSW. The success of the ground barrier was demonstrated through a thorough quality control program implemented during each phase of the project and which satisfied the design criteria.

Long term settlement of the wall is being monitored through a one year program to verify less than 50 mm total settlement, with measured values as of March 2007 less than 10mm in total.

The long term performance of the wall will be closely monitored by RLMC, including via a system of groundwater monitoring wells fitted with automatic water level loggers located both inside and outside of the barrier wall.