The remediation of a former steelworks site in Newcastle, Australia included the construction of the deepest open-trench groundwater barrier wall in the world (at the time of construction). Piezocone tests (CPTu) were undertaken down the centre of the wall, to the clay base. The use of the piezocone to verify the wall back- fill in situ was a notable innovation and overcame a number of challenges to be successful. A total of 23 tests were completed at regular spacing along the wall. The success was aided by the preparation and implementation of a specific test procedure that surpassed industry best practice and exceeded the requirements of the Australian Standard for CPT. The project demonstrated that the piezocone could be successfully used as a valuable adjunct to quality assurance verification of deep soil-bentonite walls.

The remediation of a former steelworks site at Mayfield in Newcastle, Australia, included the construction of the deepest open-trench soil-bentonite groundwater barrier wall in the world (at the time of construction).

The strategy adopted for remediation of the former steelworks site was containment and comprised the following key elements:

Soil bentonite walls are low permeability groundwater barriers constructed by excavating a trench under bentonite slurry. The slurry stabilizes the excavation and pre- vents it from collapsing, even below the water table, as described in Ryan & Spaulding (2007). The permeability achievable with this technology is a function of the nature of the blended soils and of the percentage of dry bentonite added, and is typically in the range 1 x 10-7 m/s to 1 x 10-10 m/s.

Given the range of depths of excavation, two pieces of equipment working in se uence were used: a backhoe modified to dig to 25 metres to complete the first phase of the trench, and a mechanical clamshell to excavate the deeper material down to the final depth and key into the basal stiff clay or weathered rock. As the excavation proceeded, the trench was backfilled with a low permeability mixture, consisting of a blend of excavated soil (predominantly sand), imported natural clay and bentonite slurry.

Mixing of the constituents generally proceeded along the trench in a linear fashion. The composition of the completed wall was 75% sand, 23% clay and 2% bentonite, and therefore described in geotechnical terms as clayey sand. Laboratory permeability tests during the mix design stage showed this mixture had a permeability lower than the specified 1 x 10-8 m/s.

Quality control of the bentonite slurry properties was important to ensure trench stability so that the backfill material could be properly placed. The tests on the slurry included viscosity (using a Marsh Funnel) and filter press. Specific on-site testing of blended backfill material was performed daily before incorporation in the trench. It included daily fines content (passing 75µm sieve) to verify that the minimum 20% fines criterion was achieved (a total of 220 sieve tests were undertaken), slump tests to check consistency and densities. In addition, mud-balance densities of in-trench backfill was monitored from samples taken at different depths (including 2 m from the bottom) to check that backfill remained heavier than in-trench slurry by at least 0.25g/cm3.

Once the soil-bentonite backfill material was placed to form the barrier wall, there was no simple test to verify the continuity and integrity of the completed wall. In additional to the above-mentioned conventional quality assurance checks during blending and placement of the soil-bentonite backfill, the client requested a test to provide confirmation of the integrity of the completed wall at selected locations. Piezocone testing down the centre of the wall, right to the clay base key-in, was selected as likely to be the most effective and practical test.

The use of the piezocone (CPTu) to verify the wall backfill in situ was a notable innovation and overcame a number of challenges to be successful. The purpose of these tests was to confirm the uniformity of the soil-bentonite backfill, the absence of sand layers and verify a clean key into the basal stiff clay. The main challenge was to maintain verticality down the centre of the 0.8 m wide wall to depths over 40 m. A secondary challenge was to correctly interpret the resultant test plots.

A total of 23 successful CPTu were completed at regular spacing along the wall. The success was aided by the preparation and implementation of a specific test procedure that surpassed industry best practice and exceeded the requirements of the Australian Standard for CPT AS1289.6.5.1 (Standards Australia 1999).

For the 0.8 m wide soil-bentonite wall the average deviation from vertical could not exceed 0.6°, assuming that the test commenced in the centre of the wall (i.e. 0.4 m from the side walls). The following summarises the test procedure that was adopted to achieve this:

The piezocone testing is illustrated in the diagram shown in Figure 2. 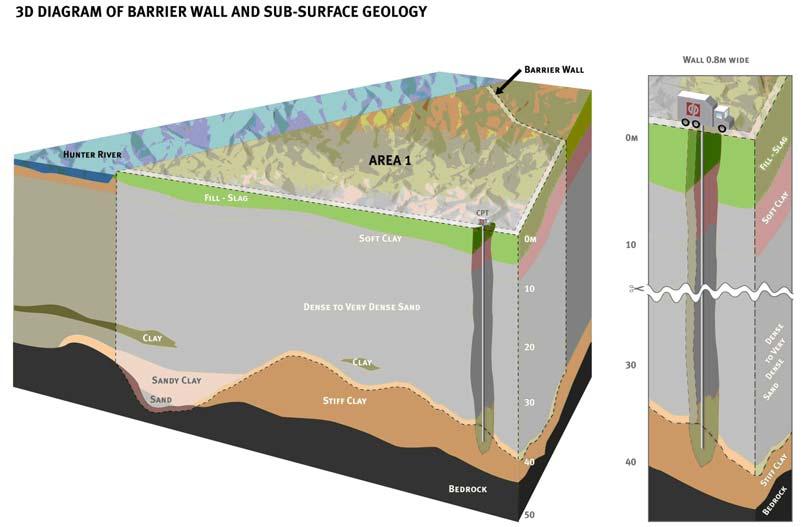 Figure 2. Diagrammatic representation of stratification and piezocone testing down completed Barrier Wall (the wall construction replaces the in-situ strata with a continuous panel of soil-bentonite).

The successful tests ranged in termination depth from 29 m to 48.0 m. Details of the success rates are given in Section 4.

A typical piezocone plot down the centre of the soil-bentonite wall is shown in Figure 3. Most of the tests undertaken exhibited similar features, which included: 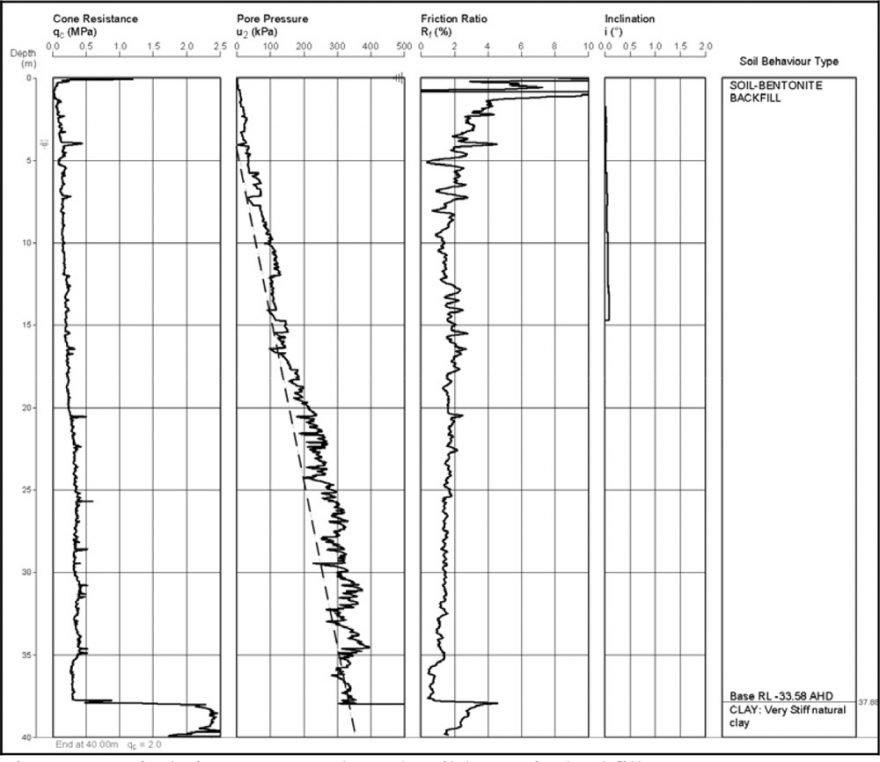 The minor spikes visible in many of the tests were attributed to either thin sandy lenses or clayey lumps being pushed aside by the advancing cone. Neither of these were considered substantial enough to affect the overall hydraulic performance of the barrier wall.

A few of the tests indicated a lower sleeve friction, friction ratio and excess pore pressure over the last few metres of the test, such as the test in Figure 3. This raised the question of whether the sand content was higher towards the base of the wall, or whether it was due to the sensitivity of the fluidised sand-clay-bentonite mix. Excess sand could possibly occur if the sand component of the slurry did not stay in suspension and was not displaced by the backfill, or if sand fell into the trench due to in- adequate trench stability. Regular soundings of the trench before and during backfill placement, plus the quality control tests on the backfill, indicated that sand accumulations were not occurring, and the observed effect was most likely due to the sensitivity of the backfill mixture.

All four tests that appeared to strike the side wall of the trench were continued to the clay base, and therefore still provided good information on the backfill consistency and base key-in. These were regarded as a qualified success, meaning that 82% of tests were effective. 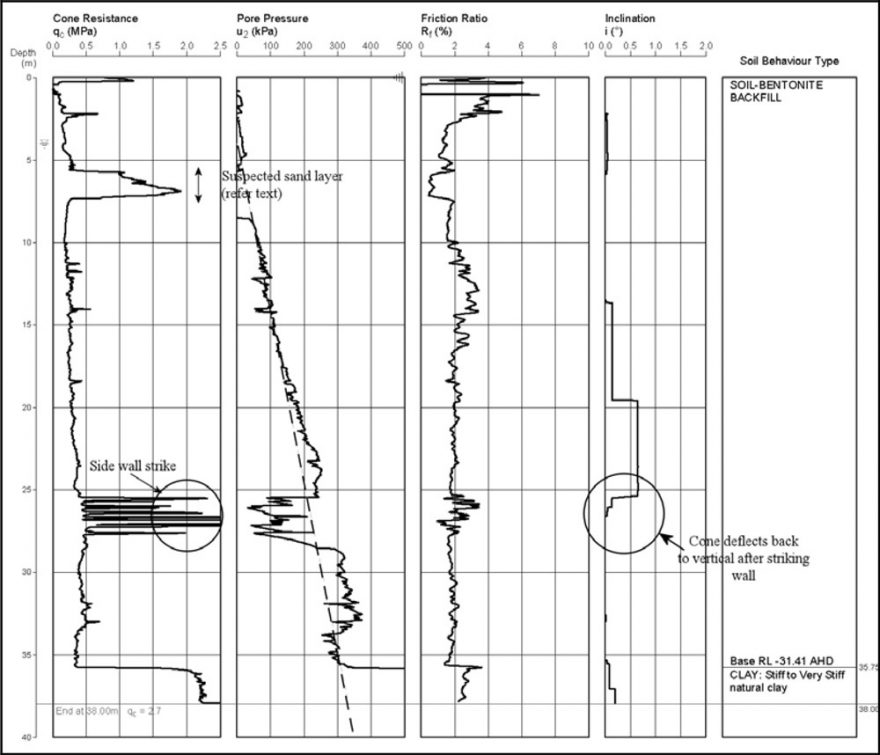 Figure 4. Example of a piezocone test that struck the side wall of the trench

The test shown in Figure 4 appeared to penetrate a sand layer between 5.8 m and 7.2 m depth. This was of concern so the following actions were taken to verify: two additional piezocone tests were carried out 1 m either side of the initial test, and a test bore drilled to 7.5 m depth at the initial test location to sample the layer of interest. The results revealed no evidence of a sand layer, and it was postulated that the ‘anomoly’ was caused by the cone striking and pushing down a coarse inclusion such as a clay lump which was eventually pushed aside. It is noted that the side wall strike that occurred from 26 m depth had a different ‘signature’ to the anomaly, and was accompanied by a straightening of the cone to vertical. It appears that the cone deflected off the side of the trench. Further, it is postulated that in most tests there was a tendency for the cone to follow the ‘path of least resistance’ and stay within the soft soil-bentonite backfill.

A further matter of interest was whether or not the undrained shear strength of the soil-bentonite backfill could be estimated from CPT, and if so the appropriate cone bearing factor. Despite the backfill predominantly comprising sand, the clay and ben- tonite content resulted in a cohesive soil with clay-like properties.

The undrained shear strength of a cohesive soil is given by:

A test bore was drilled within 1 m of one CPT location (CPT 18), about one month after placement of the backfill, and before final capping of the wall with a geo-grid reinforced bridging layer designed to allow traffic over the wall. This meant there was a limited window of time to perform any comparison tests. Shear vane tests were performed at regular depth intervals through the base of the bore. The results were compared to estimates of shear strength from CPT using Equation 1, as shown in Figure 5.

The corrected shear vane strengths ranged from 5 kPa to 18 kPa, and did not ex- hibit a clear increasing trend with depth as might be expected. It is possible that the backfill was still consolidating and also experiencing arching effects. The varying sand content also appears to have affected both vane readings and CPT-estimated shear strengths. As a result the correlation between vane shear and CPT-estimated shear strengths is poor at some depths but good at most depths. The best fit to the data was given by an Nkt value of 17, which is within the range commonly reported of 15 to 20 (Lunne, et al 1997). Although this value is consistent with a slightly under-consolidated to normally consolidated soil, it is considered that these results should be treated with caution. 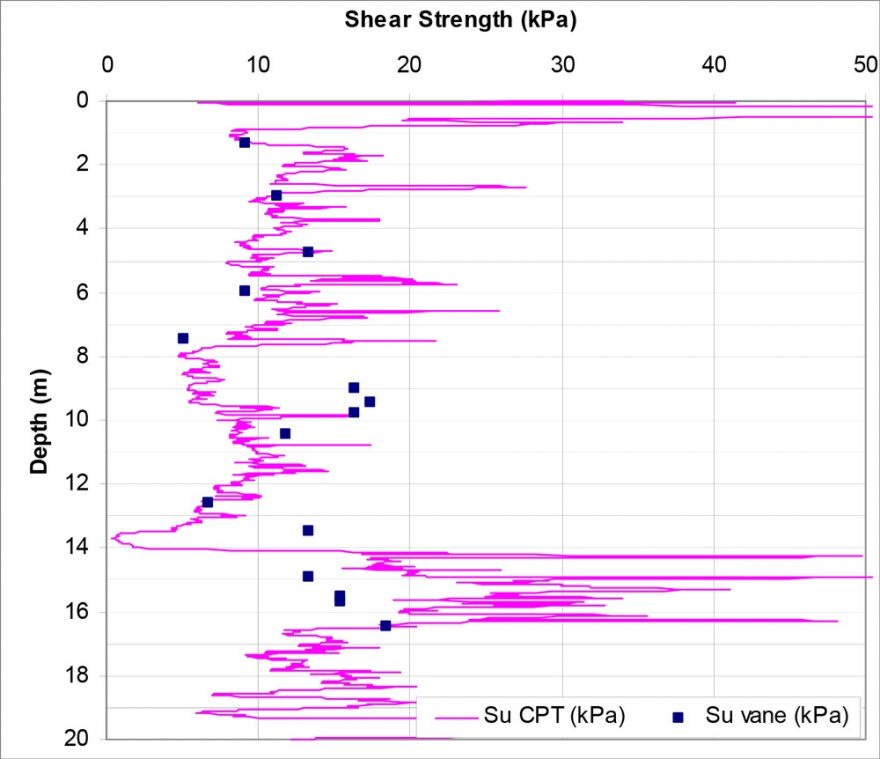 The use of piezocone (CPTu) to verify the wall backfill in situ was a notable innovation and overcame a number of challenges to be successful. The success was aided by the preparation and implementation of a specific test procedure that surpassed industry best practice local standards for CPT. Subsequent correlation of CPT- estimated shear strengths with shear vane testing at one location had mixed results but indicated that a cone bearing factor of 17 gave the best fit; however, this result may have been affected by the sand content of the backfill and should be treated with caution. The project demonstrated that the piezocone could be successfully used as a valuable adjunct to quality assurance verification of deep soil-bentonite walls.