Three main types of ground improvement technologies (Type I – consolidation assisted by drainage including the use of stone columns, Type II – Improvement by compaction, and Type III – Grout based vertical columns) and their range of applicability were introduced in Part 1 of this paper. This paper (Part 2) is intended to provide a summary of ground improvement methods using the Type III approach to increase the composite strength and stiffness of the overall foundation.

There are three technologies described in this paper: jet grouting, deep soil mixing and controlled modulus columns. The methods currently used and range of applicability are described together with a number of recent case histories from Australia and the Pacific Region.

In contrast with the technologies described in the first paper, which all result in improvement of the whole soil mass, the use of grout based vertical columns act in essence as reinforcing elements within the soft soil. The shear strength and stiffness of the composite material is a function mainly of the strength, stiffness and replacement ratio of the vertical columns formed. These methods only bring marginal improvement of the soil mass between the columns and therefore acceptance tests are either performed inside the columns or reliant on full scale loading.

There are two main techniques, depending whether the binder is mixed in-situ with the soil - hence resulting in a ‘soilcrete’ column - such as deep soil mixing and jet grouting – or whether the grout mix is introduced in the soil without blending, which involves a soil displacement mechanism, such as with Controlled Modulus Columns (CMC).

Reportedly a Japanese invention, this technology was also developed into a construction process in Italy and has been applied on projects in Australia since 2000 (Walsh Bay). In this technology, a cement grout is injected at very high velocity to break down the soil formation and bring it to a near homogeneous liquid suspension state, which hardens into a cementious column.

Simply put, the treatment is carried out with the following steps:

Although the columns are generally cylindrical, other shapes can be obtained depending on the application, including construction of thin walls (see Fig. 1). There is a wide range of applications for jet grouting, including the underpinning of structures, ground water control and improvement of soil for new structural loads (Hewitt 2006).

Lihir Gold was the first soil improvement application using jet grouting carried out in PNG. The construction of a geothermal plant in the caldera of a former volcano at Lihir (PNG) was complicated by the presence of a compressible silt layer with high organic content found between 9 and 23m depth and with variable thickness; the top layer, was a reclaimed fill of volcanic origin comprising rock material up to boulder size with silty clay infill. 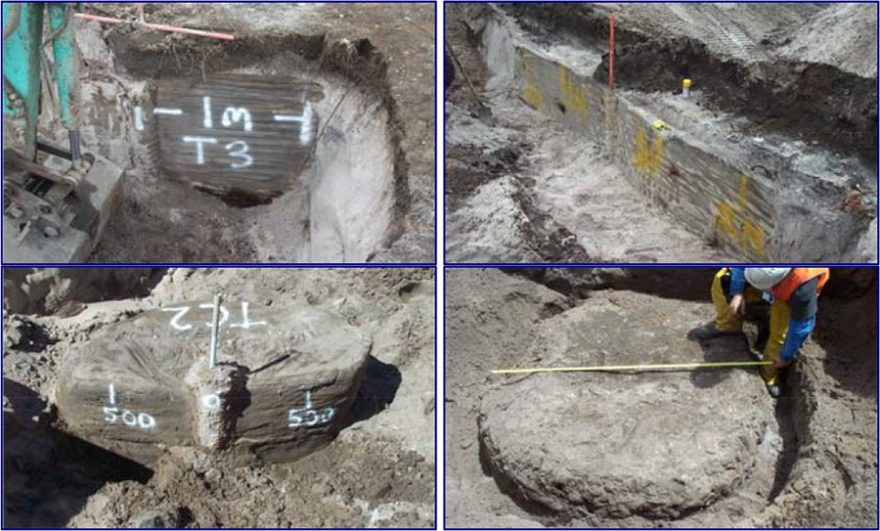 A study by the design consultant estimated that differential settlement (tilt) across the powerhouse foundations and the cooling towers foundation slabs would reach 80 mm in absence of treatment and was deemed not structurally acceptable. Jet grouting was selected as the optimum method to penetrate the overlying layer of fill to improve the underlying layer of compressible silt. Jet grouting, which relies on drilling small diameters pilot holes (80 to 110mm), was well adapted to the presence of obstructions. In addition, the columns were installed only where needed, e.g. in the lower stratum, which translated into 50% reduction in quantities compared to a piling approach.

The treatment objective was to limit maximum settlement and hence differential settlement to of less than 20 mm. The adopted design was a grid of 800mm diameter columns with a minimum UCS of 4.5MPa and a replacement ratio (RR) of 10%.

The conditions under which the JG works were carried out was complicated due to the presence of sulphuric acid in the groundwater as well as the presence of organic silts (see table 2&3). Even though it is practically difficult to predict with accuracy the impact of these contaminants on the final soilcrete product (ability to set, ultimate resistance, porosity, etc.) preventive methods can be used to ‘neutralise’ these contaminants in-situ. The first measure is to use special sulphate resisting cements, which unfortunately were not available locally. The design objectives were finally met relying on a combination of ‘pre-cutting’ of the columns with low density grout and use of high ‘displacement ratios’ (proportion of cement grout as a percentage of the total volume of ‘soilcrete’ column), in the range of 70%.

Deep soil mixing has been used on large projects since 1970's mainly in Scandinavia and Japan. It is now more common in all parts of the world and significant refinements and developments are still continuing today.

The prime factors that influence the properties of the mixed soils are the soil parameters and moisture content, the nature and dosage of the material added and the efficiency of the mixing tools and process. A range of cementitious materials such as lime, cement, flyash and slag products may be used for deep soil mixing. The technique can be sub-divided into two classifications namely wet systems, in which the additives are premixed with water, and dry systems, in which the materials are added in dry powder form. Various systems have been developed for both the wet and dry techniques, targeted primarily at mixing efficiency for the targeted soil conditions, be they granular or cohesive, relatively wet or dry, and their insitu density and cohesion. As such a general “one for all” system in soil mixing does not exist.

The attached Table 1 presents a brief comparison of different DSM techniques that are currently available in the Australia and New Zealand region. The soils targeted and treated with the different systems vary significantly and as do the parameters of the finished product. The systems should therefore not be compared relative to each other, but rather on a best for project selection. Established design methods (Carlsten, P. and Ekström, J. 1995 and EuroSoilStab 2002) for DSM give guidelines for design of deep soil mixing.

The upgrade of the railway network at Sandgate in the Hunter valley required the construction of two new railway lines immediately adjacent to the working track, which included the crossing of an environmentally sensitive wetland area (see Fig. 2) comprising very soft silty clays to depths of 6 to 30m. A lattice pattern of interlocking 800mm dry-mix columns was installed, as shown on Fig. 3, between 5m and 8m deep using the Swedish Keller-LCM technique. The treatment was carried out under the new rails to provide the required shear strength and stiffness to ensure the serviceability of both the existing and new track. The treatment improved the insitu shear strength of the clays from the original 8 to 15 kPa to 100 to 200kPa. Key aspects of the dry DSM system were the light and compact equipment that enabled access to the site, the immediate stiffening of the soils after addition of the binder and the absence of spoil. The programme schedule required the rail embankment construction following immediately the soil stabilisation. Monitoring of the line since commissioning is ongoing and indicates performance within the design parameters, and will be the basis of a future paper. 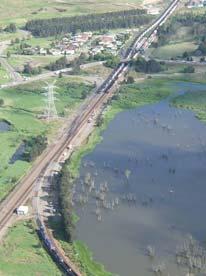 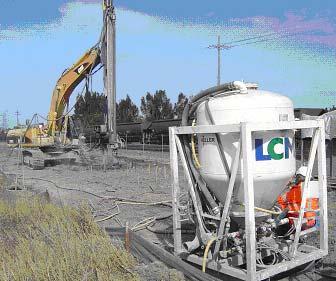 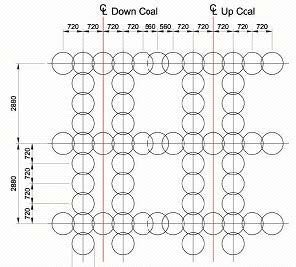 The Controlled Modulus Columns (CMC) is a ground modification system that reinforces soil by screwing a full displacement hollow auger into the soft soil and installing a low pressure cement- based grout column, as shown on Fig. 5 (Plomteux, 2004). The grout mixture then flows under low pressure out of the auger base as it is retracting to obtain a high capacity column that can be used in close vicinity of sensitive structures. The grout is injected under low pressure, typically less than 10 bars, and no soil mixing takes place during the pressure grouting. To ensure that the soil above the auger remains compacted, the top of the auger is equipped with reverse direction flights. The result is a composite system with column reinforcements bonded to the surrounding soil. 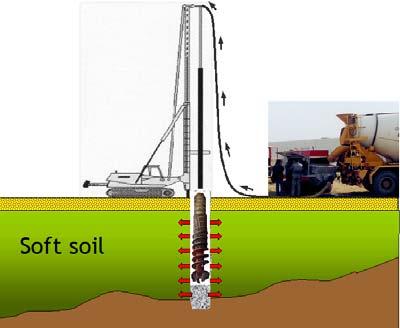 The main features of CMC technology are:

An atypical example of soil improvement for the construction of a commercial building at Bermuda Street (QLD) is presented, with deep CMC columns founded to 23m deep through very soft to firm, highly compressible clays.

The first phase of the project, which had been completed in 2001, used a combination of Dynamic Replacement method and preload to stabilise several building pads lying over 2 to 7m of clay below 2m sand layer. The proposed buildings were never built and instead replaced by a single building, 60m longer, extending over a deep alluvial channel, as shown on Fig. 6, with almost vertical sides and filled with highly compressible clay (Qc values between 0.2 and 0.5MPa). The CMC were installed with variable grids to accomodate for the different building loads and site improvement history, with generally a slab-on-ground design except in the heavily loaded dock area where the CMC also included partial reinforcement in the top 5m to resist the design horizontal breaking forces. 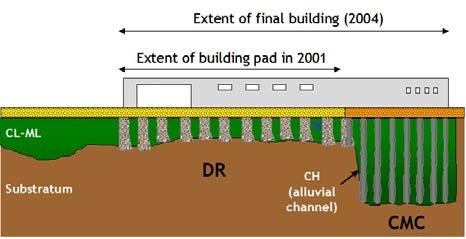 The case studies presented in this paper are not an exhaustive list of all the recent soil improvement jobs carried out in Australia and the Pacific Region. However, the authors have selected representative technologies of modern practice in this region. A technical summary table of recent case studies presented, and others, is provided in the last page of this paper. As the pressure increases for building on poorer sites, it is hoped that the information provided will encourage engineers and professionals to further investigate the application of these technologies when confronted by settlement and bearing capacity problems.

Soil improvement is a specialist field requiring caution and experience to ensure that the appropriate system is chosen and that the design considers the limitations and restrictions of both soil conditions and soil improvement systems. Furthermore, the success of a soil improvement contract rests primarily in its proper execution, therefore soil improvement projects should be carried out by specialty contractors with the relevant design and field experience.

Hence, it is essential that, from design to construction, geotechnical consultants and specialist contractors work together in order to ensure that the project expectations are met. 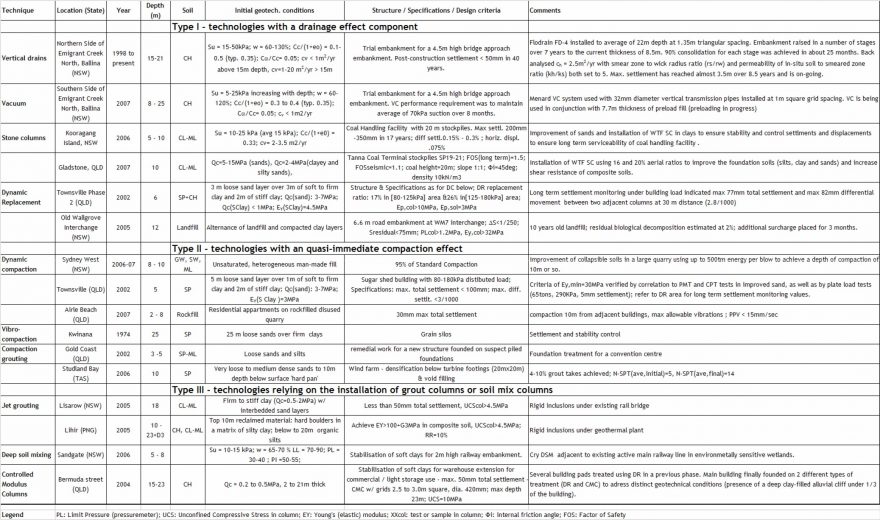