This paper discusses the geotechnical aspects of a proposed expansion of the Port Kembla Inner Harbour to accommodate container and vehicle storage. The site is underlain by a variable sequence of uncontrolled filling and estuarine/marine sediments that posed a challenge for design and construction. Design solutions to provide pavement and hardstand areas were focussed on maximising re-use of on-site materials and minimising off-site disposal. The ready availability of slag (a by-product of the nearby Port Kembla Steelworks), minimised the need for importation of quarry products to create working platforms and for pavement construction. In summary, the project is an example of the application of a reduce, re-use, recycle methodology.

The NSW Government has identified the potential and need for the expansion of Port Kembla, as well as those at Port Botany and Newcastle, in order to increase the States overall shipping capacity. The original Port Botany capacity was 650,000 twenty foot equivalent units (TEU) per annum. By 2020, it is projected that NSW throughput will be in excess of 3 million TEU per annum. Port Kembla's available berth space, close proximity to Sydney and road/rail network connections make it a logical location to expand the port facilities of NSW, in addition to those being carried out at Port Botany. 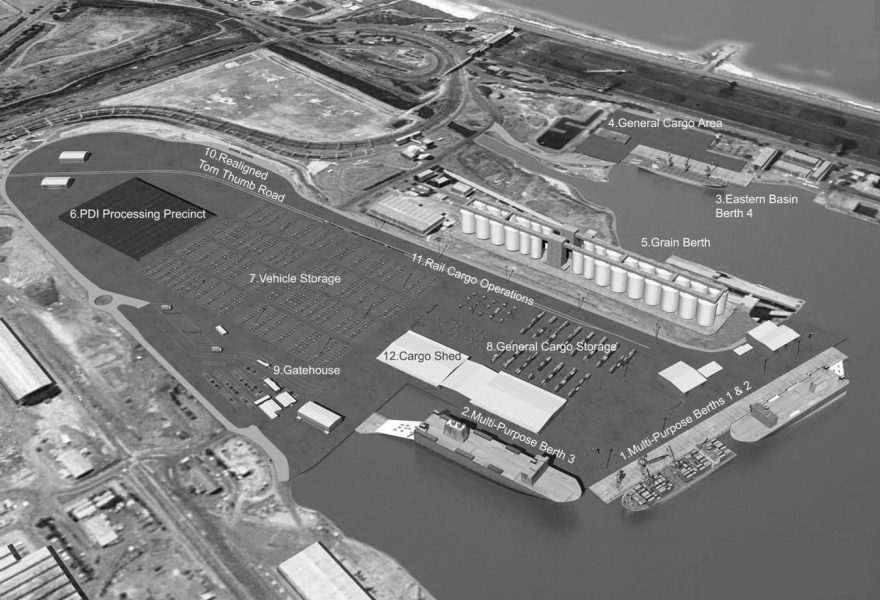 Investigation works were undertaken in May 2005. Construction commenced in April 2006 and was completed in May 2008.

Port Kembla was known as Red Point until 1892 when the name was changed to reflect the use of the port for coal exports from the Mt Kembla mine. The ready availability of coal, which has been mined commercially since 1848, has attracted heavy industry to the area, most notably the Port Kembla Steelworks which commenced steel production in 1931. Work on the Inner and Outer Harbours began in 1898, with more recent improvements around the 1960's. 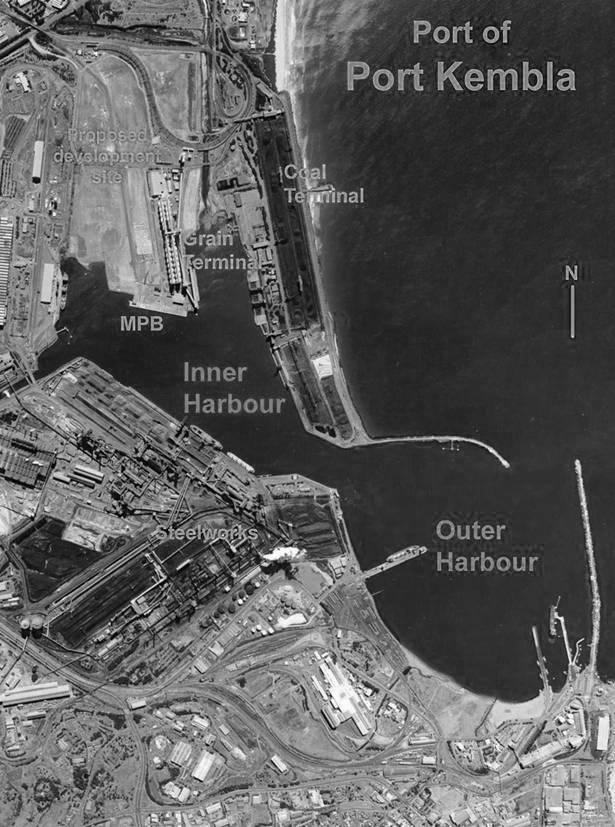 Figure 2: Layout of Port of Port Kembla. The proposed development site is in the north west section of the harbour precinct.

The port (refer Figure 2) is now Australia's leader for steel exports and second largest for grain exports. As such, expansion of the facility to accommodate further growth is seen to be of State and National importance.

Port Kembla Inner Harbour is located some 70 km south-west of Sydney and 2 km south of the Wollongong CBD. The site of the proposed development comprised an irregular shaped parcel of land with an area of about 55 ha on the northern side of the Inner Harbour. It is bounded to the north by a rail spur, to the east by roads, rail lines and a grain terminal and to the west by roads (refer Figure 3).

Figure 3: View north across Port Kembla Inner Harbour. Development area is vacant to the west of the grain terminal.

Prior to construction, site levels fell in the south to south-westerly direction (ie: towards the Inner Harbour) at grades of 1 in 100 to 1 in 150, with an overall difference in level estimated to be of the order of 10 – 12 m. The site comprised vacant hardstand areas which were variably used for product storage, truck marshalling and quarantine purposes.

The site is underlain by an interbedded sequence of silt, sand, clay and gravel alluvium (Quaternary age) which in turn is underlain by either Budgong sandstone (red, brown and grey volcanic sandstone) or Dapto Latite (melanocratic Latite of flow or sill origin), both belonging to the Shoalhaven Group of Permian age (Dept of Mines, 1974). The surface levels around the Inner Harbour have been extensively altered by the placement of filling (Soil Conservation Service NSW, 1990). Dredged sediments from the construction of the Inner and Outer Harbours were placed across the site overlying the original alluvial deposits. In order to provide a suitable surface, slag gravel was placed over the dredged sediments in recent years to create a hardstand area (refer Figure 4). 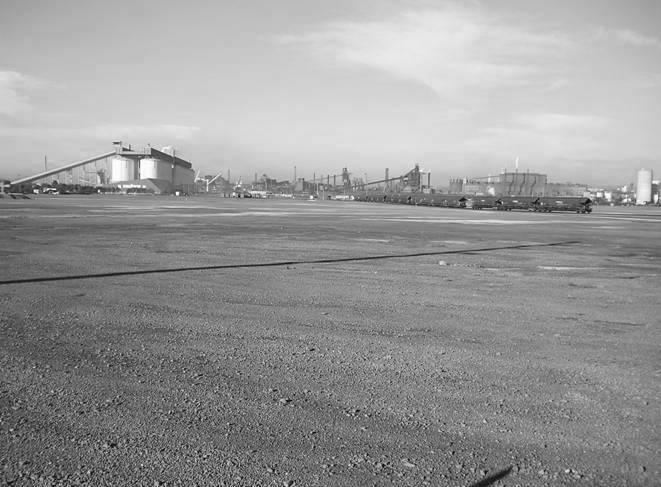 The results of previous site investigations were consistent with the geological mapping and site history, with filling comprising dredged marine sediments, slag gravel (which is cemented in parts) and crushed rock to depths of up to 12 m overlying alluvial deposits of very loose sand and variably soft to stiff clays. Weathered siltstone bedrock was encountered below RL -8.4 m to RL -16.9 m.

The field investigation comprised a programme of: 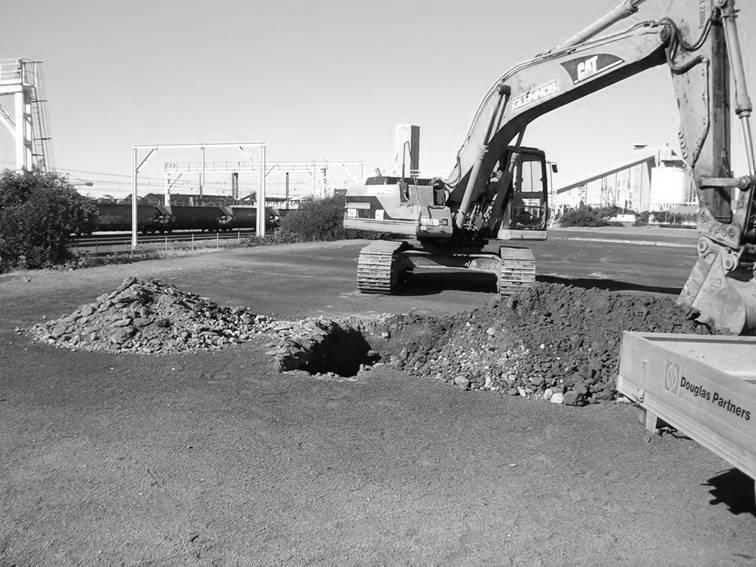 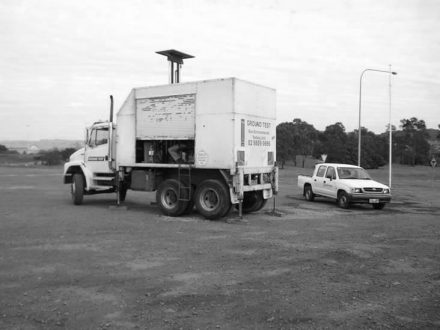 The results of the field investigation identified a distinct layered profile summarised as follows:

Groundwater was encountered at depths of 0.5 m – 2.9 m, which in some cases comprised perched water within the site filling. The subsurface profile is summarised in Figure 8 with a typical cone penetration test printout shown in Figure 9. 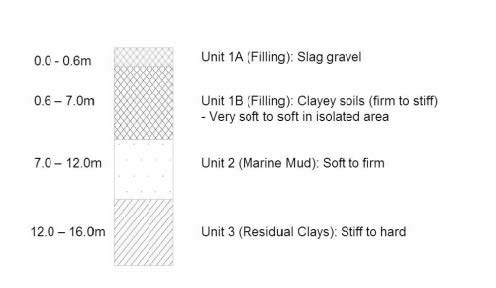 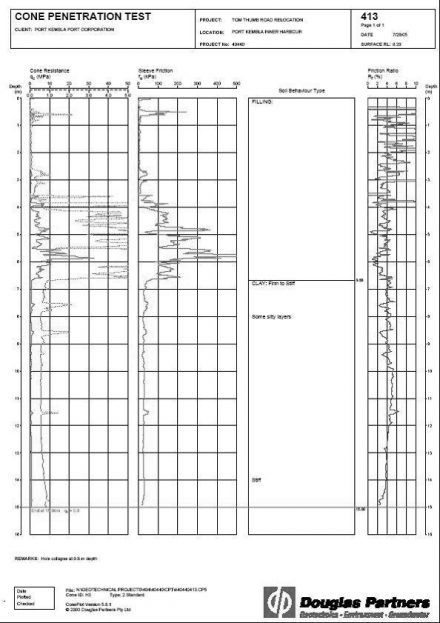 A programme of field and laboratory testing was undertaken on typical samples recovered from the test pits for the purpose of evaluating classification properties, field moisture contents, particle size distribution and California bearing ratio.

Table 1 summarises the results of the laboratory testing and indicates the significant variability of mechanical properties of the site. Particular note is made in the variability of plasticity (ie: low to high plasticity with liquid limits ranging from 24% to 65%) and in-situ moisture contents (15% to 68%, with moisture in excess of the plastic limit). California bearing ratio of the clay filling was typically low (1.5% - 3.5%). The CBR of overlying slag material was high (60% - 140%) and could be re-used as a working platform for pavement construction.

The design model for pavement analysis was developed for three distinct zones: car duty, truck duty and heavy duty. The aims of the design were to provide an enhanced subgrade that minimised excavation, maximised re-use of on-site materials and optimised pavement thicknesses for the design loadings.

For both the car duty and truck duty pavement areas, the design was based on the inclusion of a minimum 500 mm thickness of slag gravel at subgrade level. In the car duty area, where design levels were some 1.0 – 1.5 , above existing surface levels, additional filling would also comprise clayey soils excavated from other areas on site. In the truck duty area, the field levels were about 0.5 m above existing levels and, as a result, all filling required to achieve subgrade level area would comprise slag gravel.

Figures 10 and 11 summarises the design models for the car duty and truck duty pavement areas. 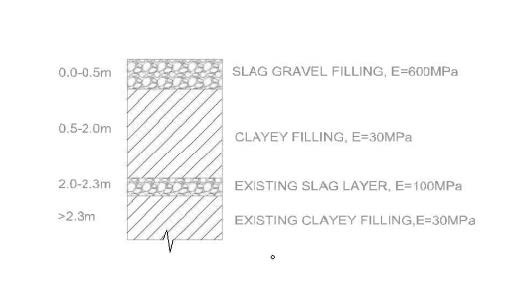 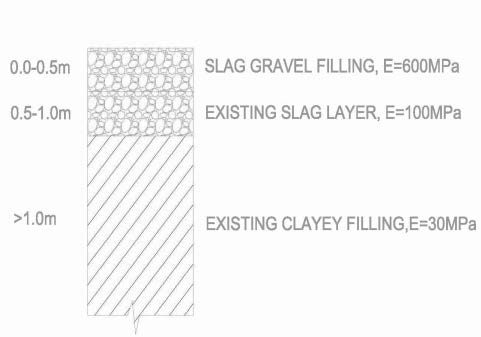 Due to level constraints, the design surface levels for the heavy duty pavements would be at about the existing surface levels. Consequently, excavation to depths of 1.5 m – 2.0 m would be required to facilitate pavement construction. This would result in removal of the existing slag layer and exposure of the underlying weak subsurface soils (refer Figure 2). 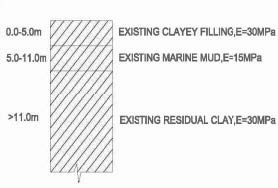 In order to bridge over the anticipated weak subgrade soils, the site preparation methodology indicated over-excavation to a level 800 mm below subgrade level followed by the placement of a 800 mm thick coarse granular bridging layer underlain by geotextile (to provide separation between the gravel and clays) and geogrid (to provide some tensile strength and to reduce post-construction differential settlements).

Based on the site preparation measures discussed above and the results of the field investigation, Table 2 and 3 summarise the site model adopted for the various pavement areas.

A 20 year design life was also nominated by the client.

Program CIRCLY was used to predict the performance of the pavement profiles for the various pavement areas. CIRCLY uses elastic theory to calculate stresses, strains and displacements under varying loading conditions. Fatigue conditions for the cemented layers were assigned using the criteria given in AUSTROADS (2004). The subgrade failure criteria outlined by AUSTROADS, Wardle and Rodway (1998) and British Ports Federation (1996) were examined for each load configuration in the heavy duty area.

Based on the subsurface conditions determined from the investigation (Section 4), the subgrade preparation procedure and developed design model (Section 6) and design traffic (Section 7), the various pavement thickness design options are indicated schematically in Figures 13 and 14. Construction commenced in April 2006 and was completed in May 2008. DP provided ongoing design support which included re-analysis and re-design of the car duty and truck duty area to include additional engineered fill to that which was originally envisaged and full time presence of soils technicians during fill placement (Level 1 compaction and testing), which included over 1400 density tests. 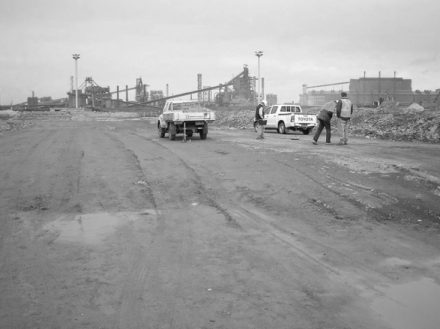 The Port Kembla project required DP to summarise significant quantities of data to develop simplified site models for analysis purposes. Once developed, these models could easily be coupled with the clients design brief to deliver cost-effective pavement design options. The site conditions meant that construction would be a challenge and as such, design needed to consider that potential problems that may arise. In this regard, the use of slag was not only an environmentally-conscious decision (ie: re-using a by-product of the steel making process) but a practical one (due to close proximity of the product to the site). Therefore, slag products could be delivered to site within reasonable timeframes.

The authors would like to thank Port Kembla Port Corporation, AAT Port Kembla, Fielder Engineers and Mainland Civil for the opportunity to be involved in the Port Kembla Multi-Purpose Berth Expansion Project.